Jovan Belcher‘s murder of Kasandra Perkins should be keeping us up at night. Families, communities, football fans, men – we all have reasons to be upset by this murder.

For us three guys, there are some specific things keeping us lying awake these past few nights. 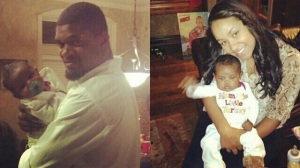 1.  Almost nobody in the mainstream media is saying it. But for those of us who do this work, the Belcher case sounds like domestic violence. A lot. And domestic violence (DV) happens. A lot. Most men reading this know someone who has been affected by it. Perhaps we witnessed it ourselves. The majority of DV is never reported. And while it can be committed by anyone against anyone, 1 out of 4 women in the US are abused by men in their lifetime[1]. On average, three times a day in the U.S. a man kills his female partner or ex-partner.[2]. It happens. A lot. While this case is tragic and shocking, it is not by any means uncommon. So, why are we pretending this case is something else? Why are we so afraid to confront the reality that we all know?

The reality of domestic violence in the US goes far beyond this small paragraph. It has kept us up many nights. But it’s not the reason we’re writing this today.

2.  Media coverage of domestic violence tends to suck. Big time. When DV does make headlines, it is often grossly distorted to the point of doing more harm than good. Predictably, we are seeing: victim blaming, minimization, denial or distortion of the “facts”. And as with other celebrities and athletes of color – racism, mostly coded.  Some examples of all too common headlines and (lack of) discussion about domestic violence:

Two examples that we like a whole lot more:

Members of the media need to be held accountable when they perpetuate victim-blaming myths. This has also kept us up many nights. But the reason we’re writing this today-the reason we’ve been up nights these past few days – is….

3.  Domestic violence is also a MEN’S ISSUE.  Belcher’s case shows us this, dramatically and poignantly. It is a men’s issue because it affects our lives, all of us, whether we are aware of it or not. And usually we are very aware. But we don’t admit it.

We need to ask ourselves:

How are we as men – and the men in Jovan’s life – working to ensure that this never happens again?

Are we men challenging those (news outlets, our families, even our fantasy football leagues) who blame victims of domestic and sexual violence for someone else’s choice to control, abuse, and even murder?

Are we as men okay with men committing violence against women? If not, what are we doing to stop it?

This, THIS is what is keeping us up at night.

Men’s silence. Our own deafening silence.

Our silence in the face of this epidemic of violence is intolerable. How dare we men turn a blind eye when our brothers, fathers, uncles, co-workers and teammates commit violence against the women in our lives? Against women we have never met?

And where are we? It is time for us as men to PUT UP OR SHUT UP. Either we start speaking out en-masse against men’s violence, or admit publicly that it isn’t a priority for us. That we actually don’t care about the consequences of violence against women.

But silence is not acceptable anymore. It can’t be. Too many women (along with a growing number of men) have worked too hard for too long. Domestic violence is too well known. Too many are injured and dying for us to stay silent anymore. There are no excuses left. Really, there never were.

If this confuses you, inspires you, angers you, just plain affects you in any way then join us at Masculinity U…or Joe Erhmann – Coach For America, or the National Organization for Men Against Sexism, or Men Can Stop Rape, or A Call to Men, or Men Stopping Violence, or the White Ribbon Campaign, or Coaching Boys Into Men, or Promundo, or the dozens of other men’s and women’s organizations doing the work we should be doing.

In the wake of Jovan Belcher’s actions, support the National Coalition Against Domestic Violence, or the Missouri Coalition Against Domestic and Sexual Violence, or the Rose Brooks Center, or the Kansas City Anti-Violence Project, or your local domestic violence organization. Donate goods to them, contribute money, volunteer for them – call them and see what they need. Write to Congress – urge them to reauthorize the Violence Against Women Act before it expires at the end of the month.

Or start your own damn group.

And share this with the men in your life.

Sincerely and in brotherhood,