We’ve got our favorite frenchies (Franklin 2 years old, Booker 8 weeks old) speaking out about street harassment. Please join them in ending this injustice.

Visit our friends at http://www.meetusonthestreet.org for much more information.
– MasculinityU Team. 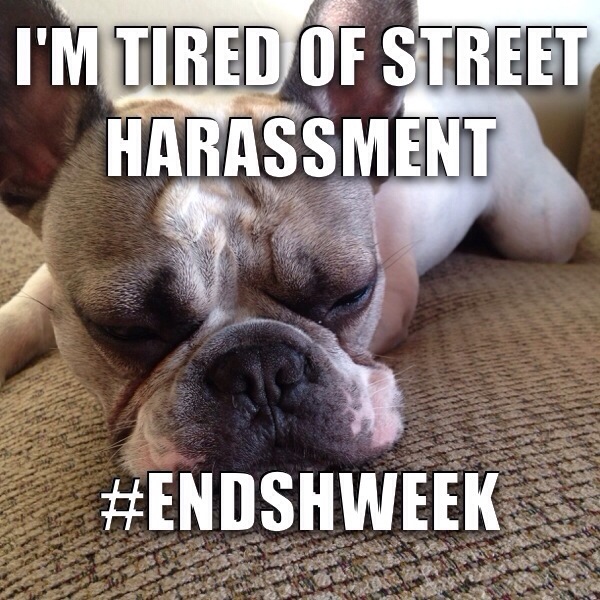 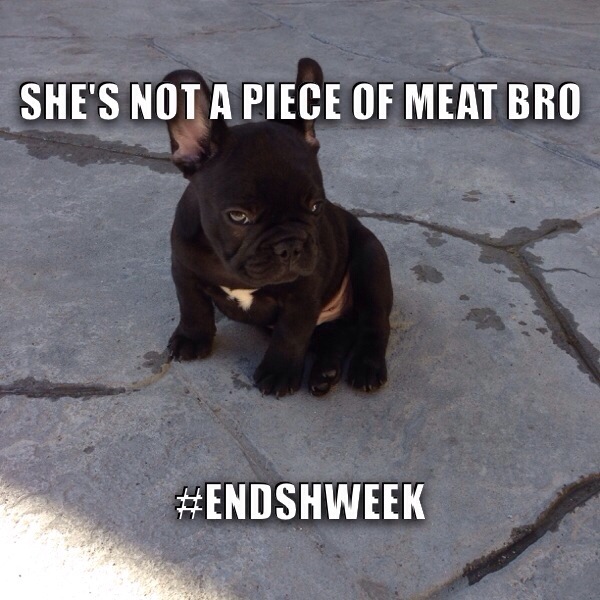 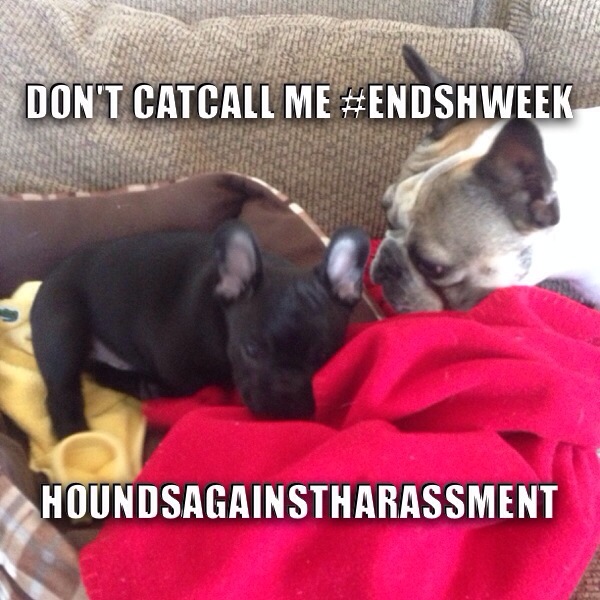 By Monica Chin and Annie Kaufman

Super Bowl Sunday, which attracts an estimated 110 million viewers, is one of the most significant days for advertisers nationwide. This means the biggest companies, flashiest advertisements, and most hype. Fueling the conversation about representation of women in these ads, The Representation Project started the #NotBuyingIt trend on Twitter during Super Bowl 2012. The goal was to critique the depiction of women in these multi-million dollar campaigns. This year, The Representation Project came back swinging with their #NotBuyingIt app, which allows users to document sexist portrayals of women in advertising and send direct messages to companies protesting this destructive imagery. The hashtag was used more than 15,000 times during the Super Bowl, attesting both to the widespread use of sexism in advertising and the frustration of viewers across the country.

While such activism advances the fight against sexist advertising, sexism is still rampant and…

[Editor’s Note: The opinions expressed in this piece are those of the author.  HAVEN, as an organization, does not support or condemn abortion, but believes that all people are experts on their own experiences and should be trusted to make their own decisions.]

If you will bear with me for a few sentences, I will eventually come to the point of how I personally came to a pro-choice position at 8 years old. My life is often influenced by the experiences of my past and this memory was recently brought to the surface. I personally enjoy the intricate set up of a story, my personal creative process and the moment of opportunity to contemplate the speculative. I hope that the way it which it is framed is able to create an illustration within your mind.

Triggers warnings are an explicit statement that a following piece of media contains descriptions, language, or imagery that some may find disturbing, or ‘triggering’; i.e. likely to induce an extremely emotionally distressing response such as posttraumatic flashbacks, anxiety, or a strong urge to self-harm. They are a vitally important part of maintaining safe and inclusive spaces in our communities.  They empower survivors to decide if and how they want to engage with material.

Trigger warning should be placed at the beginning of potentially triggering media.  The usual format is the term “trigger warning” followed by a broad description of the triggering nature of the content.  Avoid warnings with too much description because you don’t want the warning itself to be triggering.  For example:…

Great points. Thanks to the Women’s Community Center at Stanford University

So it’s not like any of us didn’t expect it. There’s been so much name-calling and political sassing in Congress in the last couple months that a government shutdown was bound to happen.  Especially after conservative Indiana Representative told the Washington Examiner on October 2, “We’re not going to be disrespected. We have to get something out of this. And I don’t know what that even is.”

Since then, there have been too many shenanigans to count: Harry Reid offensively calling Boehner out on his “credibility problem”, Representative Randy Neugebauer assaulting an innocent park ranger for blocking the WWII memorial that he and his fellow Congressmen closed, or even Majority Leader Eric Cantor’s decision to lambast Obama in a Washington Post Op-ED. If all of that isn’t enough evidence for you, then let me give you five super important reasons why this government shutdown…

Thanks to our friends at Higher Unlearning

I spoke at a conference in Toronto back in 2012 where my mission was to hang with a group of Grade 4 boys, all day. All. Day. Just me.

These boys from various parts of the city settled in, as their educators then went into their own day session.  A freckled boy with long red hair came by himself and sat down. A young boy then whispered loudly to his small group of fellow classmates at end of the room “Yo, is that a GIRL??”

Just the other day I attended a fundraising kick off for the Melrose Alliance Against Violence’s annual Candlelight Vigil and Walk. It is an event held every year in October, which is Domestic Violence Awareness month, to raise funds for programs and resources in effort to break the cycle of violence. MAAV has been a huge support to me, and continues to be, as I continuously cope with being a sexual assault survivor. So it is important to me, that I give back to them in any way that I can to show just how important MAAV is to me. My first opportunity to do so was at the fundraising kick off event, where I agreed to step out from behind the safety of my computer screen and share a little of my story with those in attendance. It was a way of expressing just how important their efforts as…

“Serena Williams Decides to Speak Out on the Steubenville Rape.”  When I read the headline, I expected to hear the tennis superstar standing up against sexual violence.  What I saw was some of the most blatant and disappointing victim-blaming.  Frankly, it saddens me when very famous and influential people miss opportunities to spread positive messages to potentially bring about change.  In this case, Serena is spreading hate.  — What are your thoughts here?

“Do you think it was fair, what they got? They did something stupid, but I don’t know. I’m not blaming the girl, but if you’re a 16-year-old and you’re drunk like that, your parents should teach you—don’t take drinks from other people. She’s 16, why was she that drunk where she doesn’t remember? It could have been much worse. She’s lucky. Obviously I don’t know, maybe she wasn’t a virgin, but she shouldn’t have put herself in that position, unless they slipped her something, then that’s different.”

As I checked my Twitter feed on the morning of Tuesday, April 30, 2013, I expected to find mostly depressing news, as I follow folks who speak out about Violence Against Women. What I found was even more disturbing than I had anticipated.  I read several tweets about an “Ex-Girlfriend Target” that bleeds when shot.  I clicked links to articles written about this and what I read was deeply troubling.

As I continued to read more responses to the target, I found myself moving from total disappointment towards anger, an emotion that I’ve been intentional about not expressing in unhealthy ways since entering the Men’s Anti-Violence Movement.

This target that was being sold online is obviously terrible for many reasons. Ultimately, it supports a hierarchy where men are in power and use women as target practice to keep our stronghold over them.

Zombie Industries, the producer of the “Ex-Girlfriend Target,” is encouraging men to take out their anger with actual guns on targets that look like women while they imagine their ex-girlfriend’s body in one of the most overtly violent acts. Preparing oneself to feel pride, relief, maybe even happiness as a simulated human is bleeding after it’s filled with bullets encourages femicide, domestic violence, and a hatred for women and girls.

Due to severe public backlash, Zombie Industries recently stated that it will redesign its shooting target to have green skin to differentiate it from a real woman. But this minor alteration only demonstrates their inability to recognize the gravity of gender violence. According to The Huffington Post, CEO Roger Davis said that Zombie Industries is sorry if the company offended anyone with the target and disappointed that “people’s feelings were hurt.”

As Monica Casper, Professor of Gender and Women’s Studies at the University of Arizona, noted, “Hurt feelings are not the problem here; structural violence is the problem.”

If it isn’t clear yet, violence against women directly hurts men, too. We are trained to allow our bodies to be tools to perpetuate cycles of violence and contribute to a system that not only remains silent about, but actually celebrates and makes games out of killing women. Living in a culture of violence produces men and boys who can’t express real emotions other than anger, stripping us of the full potential of our humanity.

So I’m going to offer some advice based on a novel thought: Most men and boys are not okay with violence against women. Though some might not be at the stage where they regard this particular “target” as “bad,” I’m willing to vouch for the majority that are ready to do something. Step one, of course, is to never buy something that encourages gender violence. Outside of that, I’ve put together a list of ten more tangible things men can do to actively take a stand against violence against women. It’s time we put an end to all forms of violence and step up as a community.

1. Communicate. One of our largest problems is that we do not talk. No one is a mind-reader. If we talk with our partners, we can understand each other’s wishes, thoughts, and desires. Consent should never be assumed.

2. Educate Yourself. There is lot of information on Domestic Violence that we ought to learn and understand. “1 in 4 women will experience domestic violence in her lifetime,” “1.3 million women are physically assaulted each year in the US,” and “every 2 minutes, someone in the U.S. is sexually assaulted” are all undeniable statistics, and need acknowledgement and continuing press coverage.

3. Contribute. We ought to give our time, thoughts, and even monetary donations to helping stop all forms of violence against women. Assistance is always needed, and there are many ways for us to get involved and support the cause.

4. Support Victims/Survivors. We can be there for those who have been victimized by domestic violence or sexual assault. This might mean driving someone to the hospital, accompanying a victim to court or the police station, or even just sitting and listening to the survivor.

5. Organize. As men, we can create or join a movement against DV.

For the rest of the top ten list, check out the original blog on The Feminist Wire

My Tweets
Join 1,317 other subscribers